The CFC is celebrating its 30th anniversary this year. To commemorate this milestone, we’ve introduced a “30 things” series on our website – stories that share 30 facts, memories, insights and/or pieces of information about the CFC, inspired by occurrences in our 30-year history.

The first and second feature stories in this series focused on the CFC’s past, looking back on award-winning film, TV and VR productions the CFC had a hand in making and sharing fun and fascinating facts about the CFC’s history. In this, our third and final story in the series, we’re looking to the future.

As we come to the close of 2018, let’s say cheers to thirty of our CBC Actors Conservatory and Slaight Music Residency alumni (listed below in no particular order). These talented, hard-working creators and entertainers are starring in and creating music for films and TV series screened worldwide, and are sure to stay on your radar for years (and awards seasons) to come.

This alumnus is truly out of this world. By that we mean he’s one of the stars of Star Trek: Discovery!

This alumnus headed straight to CBC’s Heartland after completing the CBC Actors Conservatory and has since been seen in the web series That’s My DJ (created by Directors’ Lab alumna D.W. Waterson!), not to mention his popular posts on Instagram. But he may be most beloved for playing Meliorn on Shadowhunters: The Mortal Instruments (watch Seasons 1-3 on Netflix Canada).

In recent years, Natalie Krill has made a splash on screens big and small, landing parts on series such as The Listener, Remedy, Wynonna Earp, The Next Step and Workin’ Moms, while also co-starring in films like Oscar-nominated drama Molly’s Game.

You may also remember her as the lead of 2016 TIFF selection Below Her Mouth. Catch her next in SuperGridand Everest.

If you’ve been following the CBC primetime lineup for the past few years, you’ve seen Emmanuel Kabongo. Not only did he star in soccer series 21 Thunder, he also had a recurring role on Season 1 of Frankie Drake Mysteries. 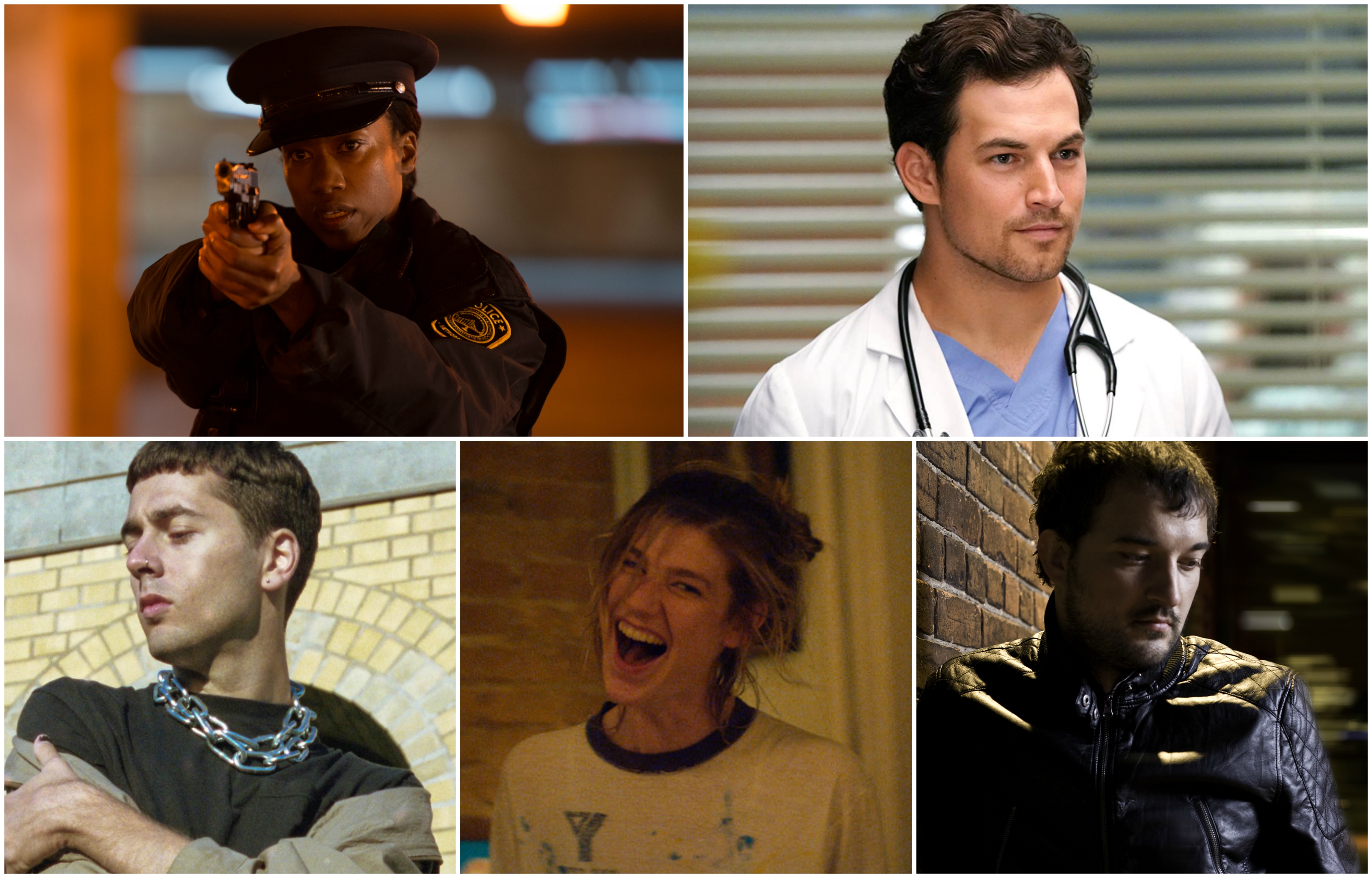 Composer Todor Kobakov has been working steadily for the past six years, making music for Canadian films like Hellions (directed by alumnus Bruce McDonald), Closet Monster (directed by alumnus Stephen Dunn) and Born to Be Blue, for which he received a 2017 Canadian Screen Award (Achievement in Music – Original Score).

You may know this CBC Actors Conservatory alumnus better as Dr. Andrew DeLuca. That’s the name of the character he’s been playing on Grey’s Anatomy since 2015.

Before checking in to that long-running series, Gianniotti found fans through his recurring roles on Reign and Murdoch Mysteries. He’s also recently appeared in a few films (Edging, Acquainted) and will receive a special tribute at Whistler Film Festival this December.

Sophia Walker made waves at TIFF 2017, starring in the buzzy Canadian feature Black Cop (written and directed by alumnus Cory Bowles). Before that, she was known for playing Matska in the hit web series Carmilla (2015-16).

Walker returned as Matska in The Carmilla Movie in 2017. In the past year, she’s appeared on Shadowhunters: The Mortal Instruments, Murdoch Mysteries and Carter.

This accomplished composer and songwriter has alternated between laying down original tracks for Canadian films ( Mary Goes Round, written and directed by alumna Molly McGlynn; and Firecrackers, executive produced by alumni Matt Code and Paul Barkin) and making his own music (his latest EP, Nudes, just came out).

We can’t wait to hear his score for the Easy Land, an upcoming feature written and directed by alumna Sanja Zivkovic (whom he worked with previously on CFC Short Dramatic Film and TIFF 2016 selection, CLEO).

Before finishing the CBC Actors Conservatory in early 2016, Glowicki went to the Sundance Film Festival with short film Her Friend Adam and came home with the Short Film Special Jury Award for Outstanding Performance.

Glowicki has also appeared in alumni features like Suck It Up (directed by Jordan Canning), Cardinals (produced by Matt Code and executive produced by Chris Bennett) and Paper Year (produced by Jennifer Shin). This is in addition to starring in, writing and directing and her own films (2016 short Queef and upcoming feature Tito). 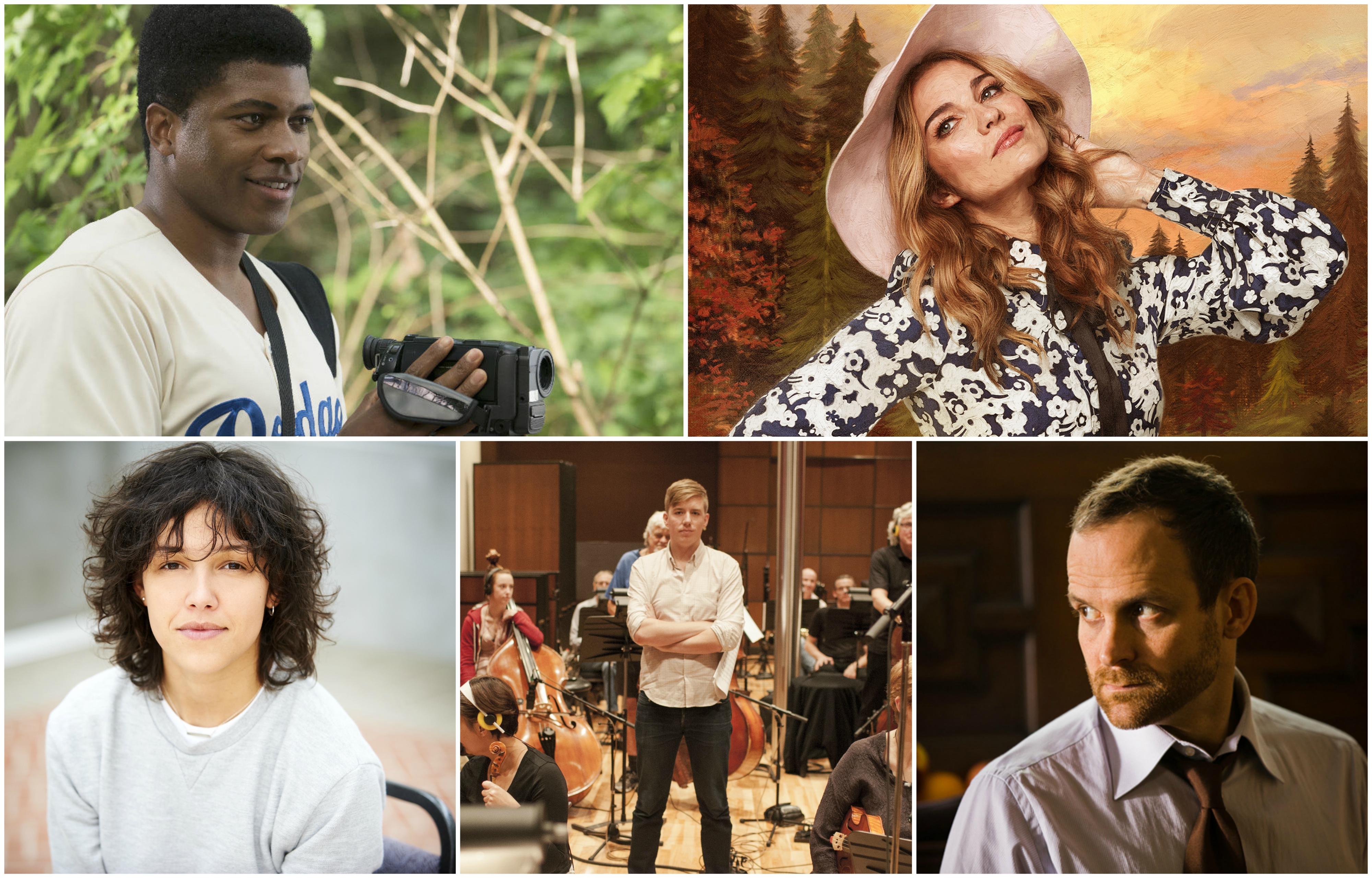 Trevor Hayes was a highly experienced actor before coming to the CFC, having appeared in The Aviator and I’m Not There!. But he’s kept busy post-CFC too, appearing on major shows like Flashpoint, The Listener, Murdoch Mysteries and Saving Hope.

In recent years, he had a recurring role on The Girlfriend Experience and has also appeared on The Handmaid’s Tale. Catch him next in Flowers of the Field, a feature co-starring another Actors alumnus Jesse LaVercombe.

In the last few years, alumna Aimee Bessada has composed music for International Emmy-nominated CBC web series How to Buy a Baby and worked alongside Lesley Barber (Composer Chair of the Slaight Music Residency) on Netflix films Irreplaceable You and Nappily Ever After.

In his pre-CFC years, Eli Goree was seen on Canadian series like ‘Da Kink in My Hair. Since leaving the CFC, he’s made the move stateside, appearing on major American shows like The 100, Legends of Tomorrow,Riverdale and GLOW. Catch him these days as Quincy Carter on HBO’s Ballers.

Goree also has a few films under his belt, including acclaimed 2016 drama Race (for which he won a Leo Award) and upcoming comedy Suicide Roadtrip.

Did you see Ralph Breaks the Internet, Ant-Man and the Wasp, Trolls and/or The Peanuts Movie in theatres? If yes, then you’ve heard work by Jeff Morrow.

Morrow composed additional music for all those films, while also creating original scores for Netflix comedyIbiza and Disney featurette Olaf’s Frozen Adventure. He received a Canadian Screen Award nomination for his work on 2014’s Cast No Shadow (directed by alumnus Christian Sparkes, and both written by and starring alumnus Joel Thomas Hynes).

If you live in Canada, you’ve probably walked by Annie Murphy multiple times. The billboards for her hit series, Schitt’s Creek, are everywhere!

Murphy plays Alexis Rose on the award-winning CBC comedy, which co-stars Dan Levy, Catherine O’Hara and CFC Board Member Eugene Levy. See her next on the Schitt’s Creek holiday special (airing/streaming December 18) and then catch the Season 5 premiere January 8. 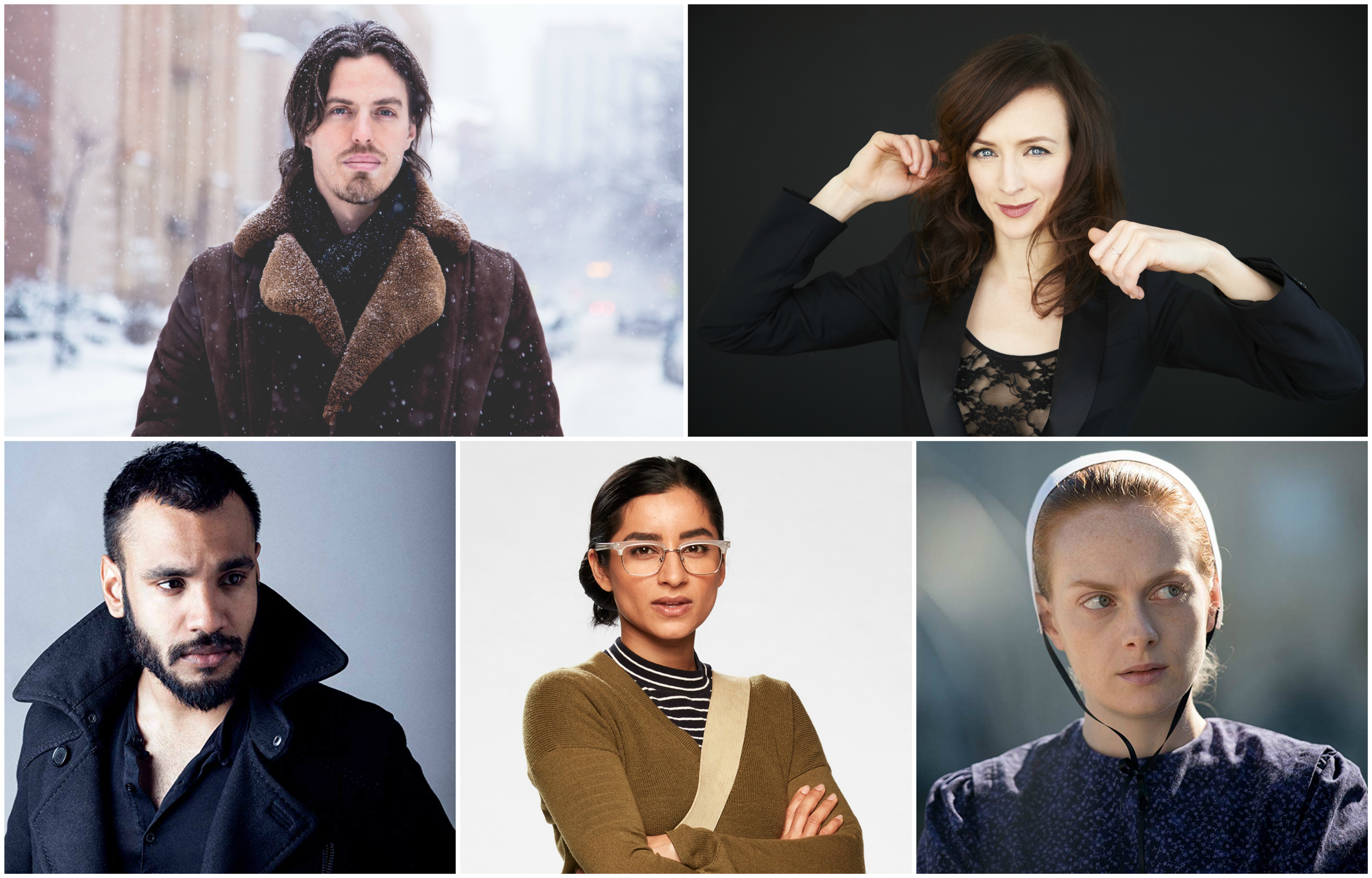 This alumna has booked roles on countless TV series since 2010, including recurring parts on Murdoch Mysteries, Copper and The Strain.

Most recently, she played Red on Season 2 of alumni series Cardinal. She also plays Anna Funk on Pure, which is set to return on Super Channel in 2019.

Andy McQueen is quite the cable king these days, booking roles on The Handmaid’s Tale, Tom Clancy’s Jack Ryan and The Girlfriend Experience. He also starred alongside Michael B. Jordan and Michael Shannon in the recent HBO adaptation of Fahrenheit 451.

Some of McQueen’s other notable credits include Edging, Brown Girl Begins and Robbery, and web series V Morgan is Dead and Riftworld Chronicles.

Sarah Slean is a singer-songwriter who has been active in the music industry since she was 19 years old, when she received her first record contract.

A three-time Juno Award nominee, Slean has recorded 11 albums throughout her career, with her latest being 2017’s Metaphysics. Her songs have been heard in films such as Passchendaele and on series like Cardinal.

You may recognize this alumna from her recurring roles on series like Copper, Guidestones, The Strain and The Beaverton. She was also on recent episodes of The Expanse and The Good Doctor, and has a lead role on the CBC comedy, Crawford.

Look out for Wraich in upcoming thriller Hunter’s Moon, described as “a creature feature twist” on Agatha Christie novels.

This Juno Award nominee has also composed for films such as The People Garden (written and directed by alumna Nadia Litz) and The Babushkas of Chernobyl. His latest film project, Canadian thriller Salvation, is set for release in early 2019. 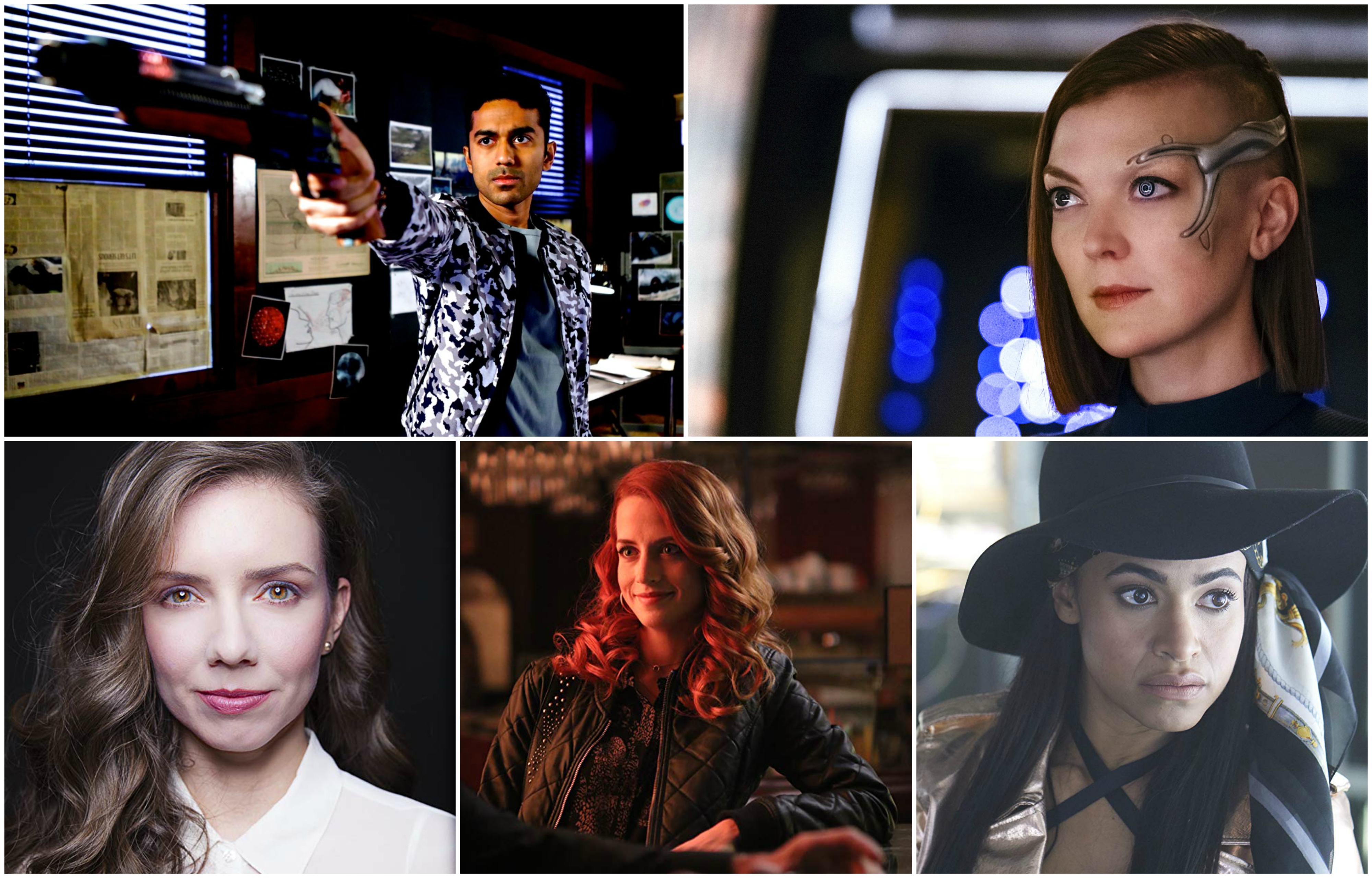 Recently, Murray had a plum role on Shadowhunters: The Mortal Instruments. Keep your eyes peeled for her on new Netflix series V-Wars.

This alumna currently composes for Little Dog, the CBC series created by and starring alumnus Joel Thomas Hynes. The showreturns for its second season on January 17, 2019.

In 2015, Cara Ricketts was cast in the CBC adaptation of The Book of Negroes (co-written and directed by alumnus Clement Virgo). She’s also appeared in Stella Meghie’s Jean of the Joneses, as well as alumni series Orphan Black, Anne with an E and Frankie Drake Mysteries.

Next up for Ricketts: The reboot of iconic Canadian series Street Legal, which will premiere on CBC in March 2019.

Before the CFC, this alumnus was best known for his role on YTV series How to Be Indie. His most current credits include recurring parts on Workin’ Moms, Carter and Wynonna Earp, as well as roles in Syfy flick Killer High (co-starring alumna Humberly Gonzalez!) and soon-to-be-released comedy Appiness. 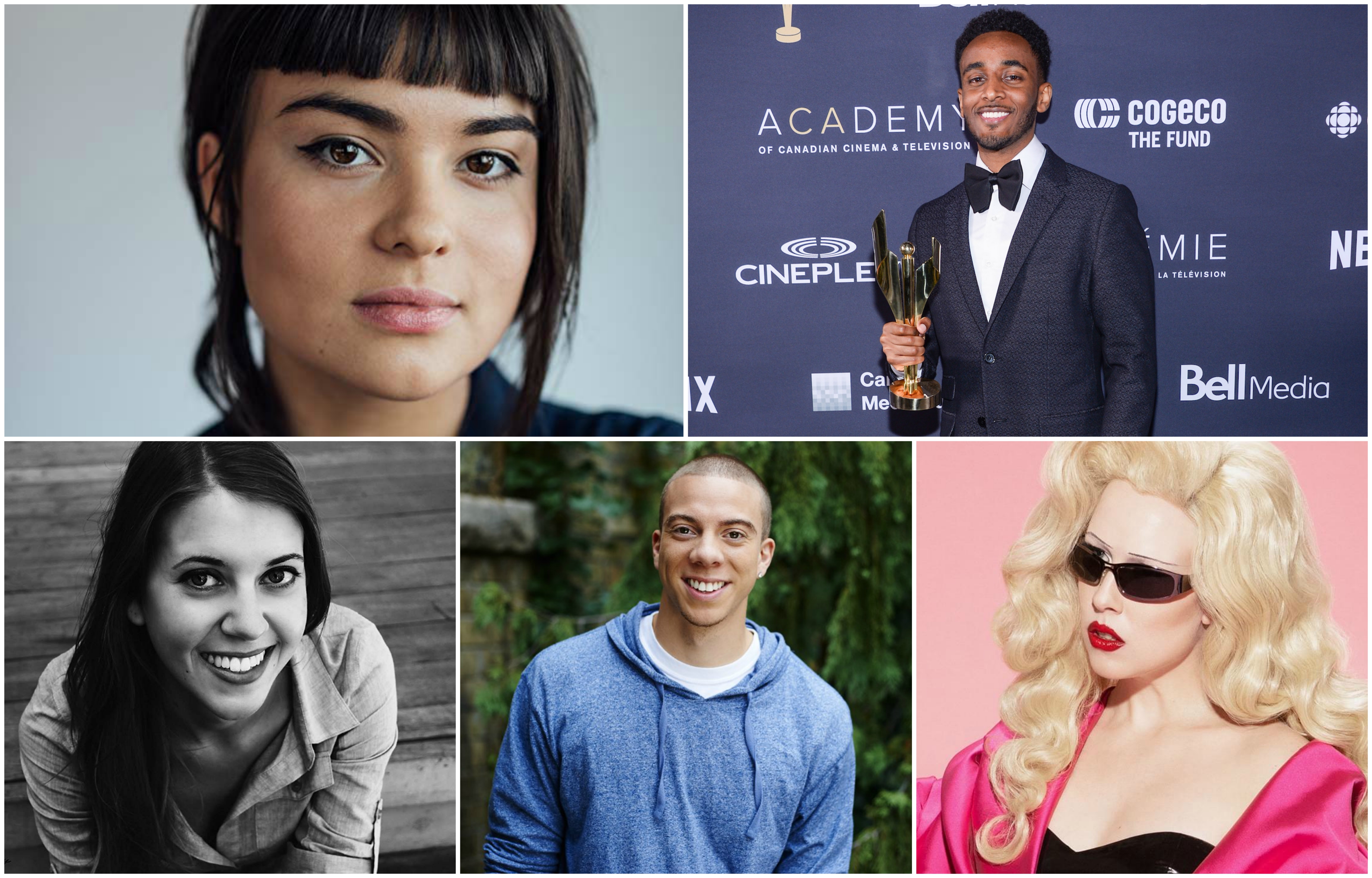 Rajo has also been seen on Toronto-shot series like Man Seeking Woman, Remedy, Rookie Blue and Suits. We can’t wait to see what he does next!

This composer alumna has created music for films like Darken (written and directed by alumni Audrey Cummings and RJ Lackie, respectively) and Tulipani, Love, Honour and a Bicycle (2017 TIFF selection), as well as the video game Westerland: Dust to Dust.

Up next for Kilbertus? Original scores for Astronaut (starring Richard Dreyfuss, Lyriq Bent and Colm Feore) and Stealing School.

Devery Jacobs has quite the history with the CFC, having starred in 2013 CFC Features film RHYMES FOR YOUNG GHOULS. In the years between that film and her time in the CBC Actors Conservatory, Jacobs appeared on Mohawk Girls and This Life, and in the film The Sun at Midnight.

Jacobs’ recent work includes Another Wolfcop, 2018 TIFF selection The Lie, and Season 3 of Cardinal. In the next year, she’ll appear in Netflix series The Order (created by alumni Dennis Heaton and Shelley Eriksen), the new season of American Gods, and films The Road Behind and Blood Quantum (from RHYMES director Jeff Barnaby!).

This alumnus has truly made the rounds on the primetime circuit, with recurring gigs on dramas like Rookie Blue and Eyewitness, as well as sitcoms such as Kevin from Work and 9JKL.

This singer-songwriter released her debut EP, CollXtion I, in 2015 and has collaborated with artists such as Troye Sivan. Her most recent album, Super Sunset, was released in October.

On the film side, her songs have been heard in Closet Monster, CFC Features’ film ADVENTURES IN PUBLIC SCHOOL, and recent Netflix rom-com Sierra Burgess is a Loser.

AND CFC ALUMNI, DON’T FORGET THAT YOU CAN SHARE ALL YOUR GOOD NEWS WITH US BY EMAILING [email protected].

BALLET BASED ON ATWOOD’S MADDADDAM TRILOGY HEADED TO NATIONAL BALLET OF...