As part the eBoss Canada Aspiring Talent Series, we had the opportunity to chat with Michael Masurkevitch.   Michael is an actor residing in Kitchener, Ontario.  Check out our interview below:

AS A CHILD, DID YOU WANT TO BE AN ACTOR OR DID IT FALL INTO PLACE THROUGH OTHER ACTIVITIES?

When I was a child, I absolutely loved putting on shows for my parents and aunt and uncle, dressing in outrageous costumes and giving concerts, and so on. My uncle is an actor and got me on stage at a dinner-theatre once as one of a team of Pirate-children at Treasure Island, and it was one of my crowning childhood moments. I also spent a lot of time living in other realities – playing with imaginary friends, making up stories and living in them – so basically acting.

So, yes – but then I had a baby in highschool and thought I needed a real job, and did Environmental Studies, and it wasn’t until years later that I was able to go back to what I wanted.

WHO INSPIRED YOU TO FOLLOW YOUR DREAM TO PURSUE ACTING?

Probably my Uncle Patrick Masurkevitch, and his ex-wife Charlotte Moore, who are actors and I loved to watch them on stage. Although I also loved movies, and I also had a supportive family (parents, grandparents, other aunts and uncles).  Actor-wise, Jim Carrey and Mike Meyers were pretty instrumental to me as a teen, being both funny, big deals, and also Canadian.

WHAT CHALLENGES HAVE YOU FACED IN THE ENTERTAINMENT INDUSTRY? WHAT HAS BEEN YOUR MOST REWARDING EXPERIENCE?

I mean the challenges – whew! Ha ha its so much work, its even just so much work just to get good enough to be competitive for anything, let alone to be competitive for Union gigs. And that’s not enough, you need representation, networking, you need to get known – the amount of work that goes into getting on set for one day is just ridiculous, and the rejection and self-doubt can get crippling.

Rewarding wise though – when I am on set, and I am living in another reality, and feeling things in a real way – that’s amazing to me. And when people watch my work and feel something from my feelings, that’s even more amazing.

WHAT IS YOUR FAVORITE TYPE OF CHARACTER TO PLAY?

So don’t get me wrong, I love playing weird characters that are all zany, because I like the work it takes to make them real.  I also love playing real villains – real as in, complex ones that are doing evil things based on layers of self-hatred or disillusionment and stuff. Lots of nice emotional grit to get into there.

But my favorite is actually the sort of “Existentialist Lead” – a normal, relatable dude who is going through tough things and has to deal with them and be changed by them and comes out as a different human. For me it just gives the most scope for being changed by the imaginary world of the scene/project, and that’s what I love.

WHAT MARKET DO YOU CURRENTLY WORK IN? ARE THERE OTHER AREAS YOU WOULD LIKE TO WORK?

So currently, I have been in a couple of non-union commercials (great times) and am more or less at the level of “decent indie stuff, sometimes with a budget.”  What I love about indie stuff is that I often get to play that ‘existentialist-lead’ role that I like, like in a recent short “Anxiety Stroke,” a heavy metal music video series called “The Crucible of Sin,” or a feature titled “Beyond the Veil” coming out soon, or in a web series I am shooting in Kitchener right now called “Pirate Mike” (so we’ve come full circle to the Pirate-Moment of my childhood haha.)

Ideally, I would love to do the same kind of work but for productions with more production value and money (I mean it would be great to be able to make enough from acting to not do anything else) but I am also aware that its a gradual process to get there.

WHAT ADVICE WOULD YOU GIVE TO SOMEONE NEW TRYING TO MAKE IT IN THE ACTING INDUSTRY?

If you are doing this to be rich and famous – get out before you’ve lost too much money on headshots and classes. Not that that’s not ever going to happen, who knows – but being an actor is a grind. It’s casting calls, it’s auditions, it’s convincing your friends to film a web series on their phone starring you, it’s self tapes, it’s delving deep inside of your darkest personality traits through expensive classes, its rejection and self doubt – and you have to enjoy that stuff. If you can find a way to enjoy that stuff, you will get better, and then eventually you may even make money.  But you have to be doing it for the love of the process, not the results.

WHAT FUELS YOUR PASSION?

I have tried a lot of different things – I’ve been a tree-counter, I’ve run events and workshops, I’ve taught workshops in schools… and I’ve enjoyed different things to varying degrees. But when I am living in another reality on set, or when I am watching people watch my work and have an emotional reaction to my work – it just feels so right, it’s kind of like a drug because of how badly I want it.  I take unpaid stuff probably more often than I should, just so I can get that feeling.

WHAT IS SOMETHING ABOUT YOU THAT MOST PEOPLE WOULD NEVER GUESS?

Oh man… I mentioned that I have a 12 year old child? That’s something people wouldn’t usually guess of me. I am also an amateur Bee-Keeper, I have a hive on a friend’s rural property, and I’ve started brewing mead from my honey.  What else… I actually have deep insecurities like everyone else, despite my love of being on camera and confidence in social situations? … I probably drink too much, but my favorite drink is literally hot water and baileys, like an old man.  I go to parties in a bathrobe, I do tai chi on side streets between auditions. Sometimes I pee into a used tim hortons cup as I drive between KW and Toronto if I have one handy and don’t have time to stop.

IF YOU WERE TO DO IT ALL OVER AGAIN, WOULD YOU DO THINGS EXACTLY THE SAME? DO YOU HAVE ANY REGRETS?  SUCCESSES THAT MAKE YOU PROUD?

Regrets is tough. I mean… I had a baby in highschool, and my fear about needing a real job made me do Environmental Studies instead of going travelling and then doing acting, and it took me years and a call centre job that I hated to clue me in to the fact that I needed to get back to it.  But do I regret that? I mean some of my best friends are from UW Env., some of my best experiences too, and I learned so much – and let alone that I now have a child who is a beautiful, complex individual that I have a relationship with.

Also I can look back on almost every audition I’ve ever done and find something that I wish I had done differently. In fact I sometimes do look back and think those thoughts, and then queue several days of mild-depression before I try to isolate the takeaways I learned and move on with life.  But they were all part of the process of where I am now, and in some way or another they were probably unavoidable, because I needed to learn those lessons… sometimes multiple times…

I guess I am proud of where I have gotten in terms of how I have grown in skill and self knowledge, and for continuing to put in the risk – the financial instability, the time commitment, the lack-of-money  – towards something that I love enough to make it worthwhile.  And when people watch my work and feel something, or when they reach out to me and say “Hey I saw your Lion Tamer commercial and it was great” that always brings a smile to my face.

WHO ARE YOU REPRESENTED BY?

Fulcher Agency, specifically John Hamilton who is a solid dude.

WHERE HAVE YOU TRAINED?

I did some pro-actors lab with Marvin Hinz, great guy, does classes in Stratford which is closer to me. I just started training with LB Studios, just finished doing the Second City Improv for Actors program, have done workshops with Jules Fitzsimmons, Ron Leach and Gloria Mann, and did a two-week-intensive with the director of the Tunisian National Theatre, Fadhel Jaibi, a fantastic man.

Michael is represented by the Fulcher Agency. If you are interesting in working with Michael, feel free to reach out to: [email protected] 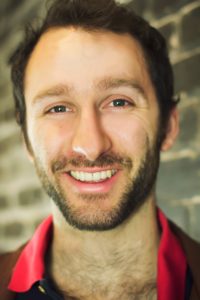 CLICK HERE TO VIEW ALL INTERVIEWS IN OUR ASPIRING TALENT SERIES

If you are an aspiring talent and would like to be featured in our Aspiring Talent Series
Contact Darlene via email at [email protected]
Open to all (e.g. Actors, Models, Singers, Dancers, Producers, Directors, etc.)

Q & A WITH ACTRESS CLARICE GOETZ

THE STYLE GUYS PIVOT TO PROMOTING FASHION AND DESIGN WITH STREAMING...